Watching African savannah fauna is full of surprise. Every morning is different from the eve and you can spot really amazing animals and behaviors.

A conflict between 2 carnivorous species is a rare scene. But when one of the opponents that is 2 kg weight faces 4 guys that are 100kg weight each, there can’t be no real fight. Nevertheless, the confrontation I will tell you about lasted at least a quarter of an hour.

This topic took place in Masai Mara National Park, Kenya, at the beginning of September during a stay in the Musiara area with Tony Crocetta and Simon Chebon (Melting Pot Safari). We were getting close to a group of 4 young Lions that seemed to be playing like cat and mouse with an Egyptian Mongoose (Herpestes ichneumon).  Caught in the open land, the Mongoose was surrounded by Lions (Photo #1). She was trying to keep them at bay, facing to the one of the Lions that was the most threatening, ready to jump on the Lion’s throat (Photo #2). Its terrible shouts and its aggressive postures seemed to make the Lions a little bit uncomfortable and they appeared unable to finish the job. On several occasions, the Mongoose was kicked by a Paw blow (Photo #3) but mostly she was able to escape the attacks, thanks to its dodging capacity. But she still was unable to escape its opponents that were surrounding her and didn’t let her to break free. After 10 minutes playing this mortal game, the Mongoose eventually fled to save her life (Photos #5, #6 et #7), with the group of 4 lions running after her. Good, she reached a hole in the ground where Lions were unable to grab her. Everything was fine now except that, after a while, unexpectedly, the Mongoose head reappeared at the den entry (Photo#8). She was watching out for the Lions that were still around, spotting at her. Then, against all odds, she run out of its hide and the fight resumed. Why did she take this risk ? Impossible to know ! But she was still fighting fiercely. In some way, the confrontation changed. Lions seemed to be a bit confused, uncertain what to do. On the other hand, the Mongoose was more and more aggressive. Several times, she jumped at a Lion’s head and bit him badly (Photo #9 et #10). The fight went on, then, after a while, the Mongoose found a way to escape. She was followed by two lowly motivated Lions and eventually reached a zone of stones and logs where she was definitely safe. 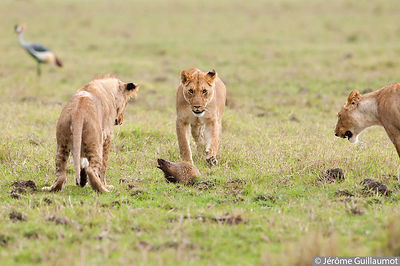 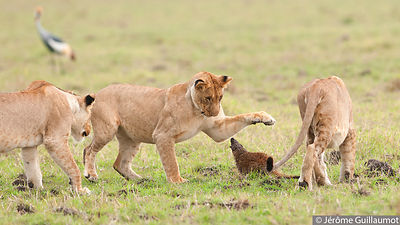 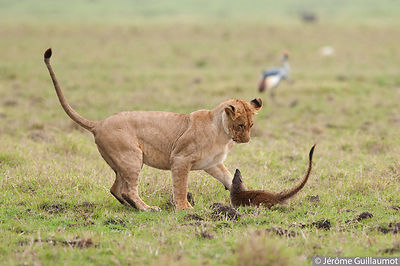 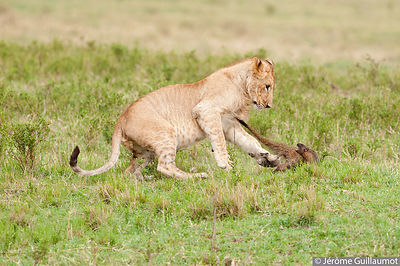 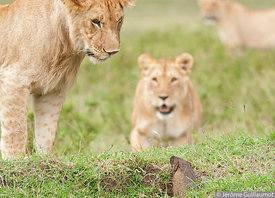 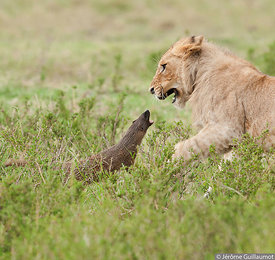